From 30 April to 1 May 2017, MMN co-organised a 2-day event in honour of International Labour Day (also known as May Day) at UNISERV, Chiang Mai University, Thailand, in collaboration with the Northern Labour Network. Over 200 participants attended the event including migrant workers employed in various industries, such as the manufacturing, construction, agriculture, domestic work, and service industry, representatives of civil society organisations (CSOs), academics, Thai government officials, and members of the Northern Labour Network.

Sunday 30 April, the first day of the event, commenced with welcoming speeches made by 4 keynote speakers including MAP Foundation Director Mr. Brahm Press, Friedrich Ebert Stiftung (FES) representative Ms. Preeda Sirisawa, Workers Solidarity Association (WSA) representative Ms. Muai Lang, and Migrant Workers Federation (MWF) representative Mr. Suchart Ing-ta. The speakers highlighted the importance of workers gathering to honour May Day, which is not only meant to celebrate workers but also to create a space where everyone can share their work-related experiences and challenges, and collectively seek resolutions. Following the presentations, participants jointly reviewed recommendations drafted on May Day 2016, and a Northern Labour Network representative updated participants on the Thai government’s response. The morning’s activities ended with a session titled, “Photo Stories,” involving migrant worker representatives presenting stories and photos of their working conditions and everyday lives in Chiang Mai in collaboration with Prachatham Media Foundation (PMF).

The afternoon’s activities revolved around “decent work” – the theme of the May Day 2017 event – and began with a presentation on the meaning and significance of decent work. Participants were then divided into 4 groups to discuss the thematic issues of: (1) occupational safety and health, (2) wages (including minimum wage and living wage), (3) collective bargaining and freedom of association, and (4) social protection. A representative of each group presented key concerns and recommendations that came out of group discussions regarding the 4 themes. Representatives of the Chiang Mai Provincial Employment Office and Chiang Mai Provincial Labour Office joined this session and responded to some of the questions raised by participants.

The day’s event concluded with a public march through the streets of Chiang Mai. Participants assembled at the Three Kings Monument in Chiang Mai’s old city, divided into two groups, and marched along routes converging at Suan Buak Hard Public Park. Participants carried banners and signs promoting workers’ rights, distributed the May Day 2017 statement to spectators along the path, and read the statement aloud upon reaching Suan Buak Hard Park. The statement highlights the fact that all workers – including migrant workers – greatly contribute to Thailand’s national economy, yet many of these people lack the right to freedom of association and experience routine labour exploitation. The statement urges the Thai government to ratify the ILO Freedom of Association and Protection of the Right to Organise Convention (No. 87) and the Right to Organise and Collective Bargaining Convention (No. 98), which state that the rights of all workers, regardless of their documentation status and the sector in which they are employed, must be upheld. The march successfully caught the attention of local people, provided an opportunity for labour rights supporters to gather in a public space, and brought awareness to the contributions of workers in Thailand.

The recommendations were addressed to both local and national levels of government and included demands to increase the social inclusion of migrant workers in Thailand, for example by using the term “migrant worker” instead of “alien worker”; to recognize workers employed across all occupations and sectors; to allow migrants to work in occupations according to their abilities; to adjust the minimum wage to a living wage by increasing the current minimum wage to 450 Thai Baht per day; and to ensure workers’ rights are protected regardless of their documentation status. In addition, some of the recommendations were addressed to the Government of the Republic of the Union of Myanmar – a country of origin for the majority of migrant workers living in Chiang Mai – including a demand to ensure that migrants have access to their basic rights upon returning home, and to urgently establish a social security system for all Myanmar citizens.

The International Labour Day 2017 statement and recommendations are available online in Thai, Shan, and English.

Recommendations on International Labour Day or “May Day” 2017 [45 KB] 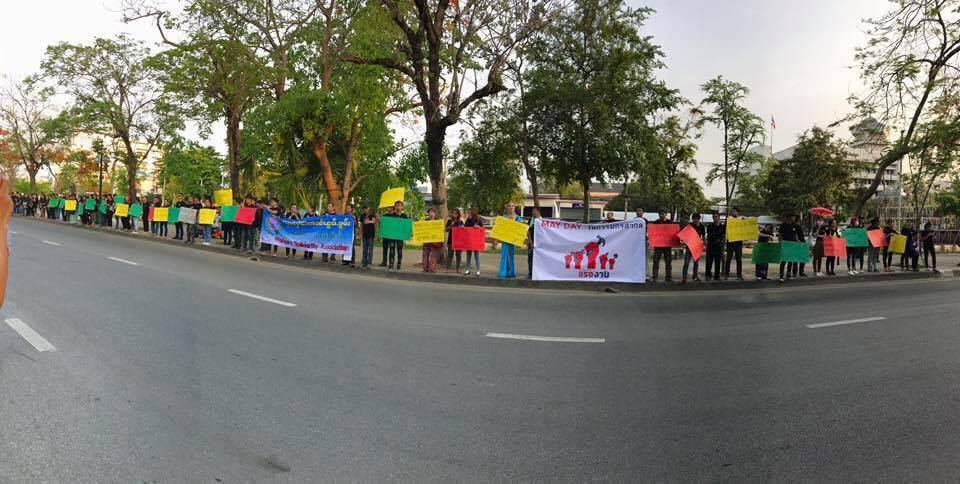