“What is your work worth? A Living Wage Now!”

2015 is a critical year, as ASEAN governments meet in September to set new sustainable development goals that may drastically impact the lives of workers. With ASEAN eyeing economic ties both inside and outside the region, there is a fear that workers’ right to receive a living wage will be relegated to the sidelines of the economic development agenda.

It was within this context that the Mekong Migration Network (MMN) in collaboration with the Asia Pacific Forum on Women, Law and Development (APWLD) organised its workshop entitled: “What is your work worth? A Living Wage Now!” The workshop’s co-organisers included United Sisterhood, MAP Foundation, Migrant International and Asia Pacific Mission for Migrants.

The objectives of the workshop included: 1) to raise awareness on decent work and a living wage; 2) to share and build upon the strategies and opportunities to advocate for a living wage; and 3) to mobilise civil society in Southeast Asia to campaign for a universal living wage.

Attended by 25 participants, the workshop commenced with a participatory activity facilitated by the MMN team. Participants assessed and discussed minimum wage trends and the cost of living in the respective ASEAN countries.

The activity was followed by a presentation by Ms. Reiko Harima, MMN Regional Coordinator, to highlight how the issue of wages are framed by different stakeholders. While a living wage is crucial for a worker and her/his dependent family members to live a decent life, the minimum wage in ASEAN countries is set only to allow a worker to be able to support her/himself, not taking into account the needs of the members of her/his family. As ASEAN countries compete to offer “low cost labour” to attract foreign direct investment, national minimum wages are currently far from living wages in the respective countries. Furthermore, many workers fall outside current labour protection legislation as they are employed in excluded less formal sectors. This is particularly the case for migrant workers, who are typically paid far below the minimum wage. While a living wage would be most welcome for workers struggling to support their families, the business sector regards any such developments as a “risk” or “disadvantage”. Given this reality, what can we do to achieve a living wage for all workers? The challenge is great.

Moderated by Ms. Pranom Somwong from the Workers Hub for Change, several panelists shared the challenges and strategies in demanding the living wage. Ms. Rina Anastacio from the Migrant International shared the challenges in calling for a living wage in the case of the Philippines. Ms. Sonia Bullong from the Asia Pacific Mission for Migrants shared the challenges faced by migrant domestic workers in Hong Kong. Mr Brahm Press from the MAP Foundation shared challenges faced by migrant workers in Thailand, noting that most migrant workers do not even receive the minimum wage, let alone a living wage, and hence the current efforts focus on ensuring all the migrant workers receive at least the minimum wage. Representatives from the United Sisterhood, shared the experiences of garment workers in Cambodia. They highlighted the fact that even when the minimum wage is increased, the cost of living in the country increases much more rapidly, which in turn negatively hinders workers’ capacity to survive. They called for regulation of prices in the country in addition to increased wages.

Finally, the workshop called on ASEAN to:

Engage with workers’ representatives and trade unions to review current minimum wage rates and establish and enforce living wages that reflect the real cost of living, so that workers and their dependent family members can live a dignified life.

The session closed with a call for justice for the victims of the Rana Plaza tragedy, which took place exactly two years to the day of the workshop.

*  For more information about the APF see http://aseanpeople.org/ 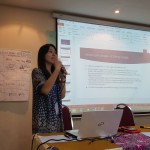 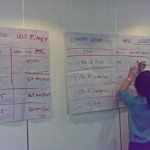 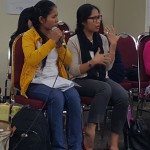 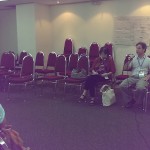 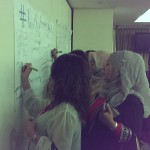 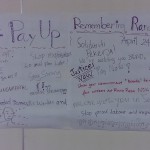 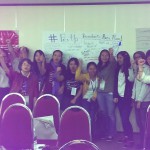