Skip to content
Migrant rights groups have urged Thais to empathise with foreign workers who staff the multibillion-dollar fishing industry, as illegal entrants from Myanmar have been blamed for a record surge in Covid-19 cases that threatens to undo months of successful efforts to contain the pandemic. Thailand has reported more than 1,300 new coronavirus cases since Sunday, with some 80 per cent of them being migrant workers at shrimp farms in Samut Sakhon, just outside the capital. Linked cases have also been found across the country.
Four provinces, including Samut Sakhon, have been locked down, with health authorities imposing a “Singapore-style model” of restricting migrant workers from entering or leaving their dormitories .
Prime Minister Prayuth Chan-ocha said workers from Myanmar who had “snuck in and out” of Thailand without the mandatory quarantine were behind the latest outbreak, but raised the prospect that officials had helped them cross the 2,500-kilometre border.

“Those who committed wrongdoing – including government officials – must face legal charges,” he said.

Still, a Twitter hashtag in Thai, “Covid Samut Sakhon”, has exploded with snipes at Myanmar workers by a public that depends on its neighbours for cheap, manual labour but routinely denigrates them.

One Twitter user posted a picture of migrant workers queuing up for coronavirus testing with the caption, “Do I still live in Thailand?”, while another said, “You should go back to Yangon”.

Thailand testing more than 10,000 for Covid-19 after record daily spike of coronavirus cases

“There really is no use for pointing fingers. It’s not going to solve any problems,” said Sompong Sakkaew, executive director of LPN (Labour Protection Network), an NGO based in the fishing communities of Samut Sakhon.

“We should show empathy and solve this problem together with an open heart,” he said. “No one wants to have the virus. There are Thais driving in from southern provinces daily to the seafood market. It could have been them, too.”

In a statement on Wednesday, the Mekong Migration Network said it was concerned about the negative impact of Prayuth’s comments that the current outbreak was due to “illegal immigrants” who had “brought much grief to the country”.

The group pointed out that the Samut Sakhon situation highlighted the disproportionate impact the pandemic had on Thailand’s migrant workers, adding that it was the “product of heightened risks faced by migrants due to their precarious working conditions and marginalisation from wider Thai society”. 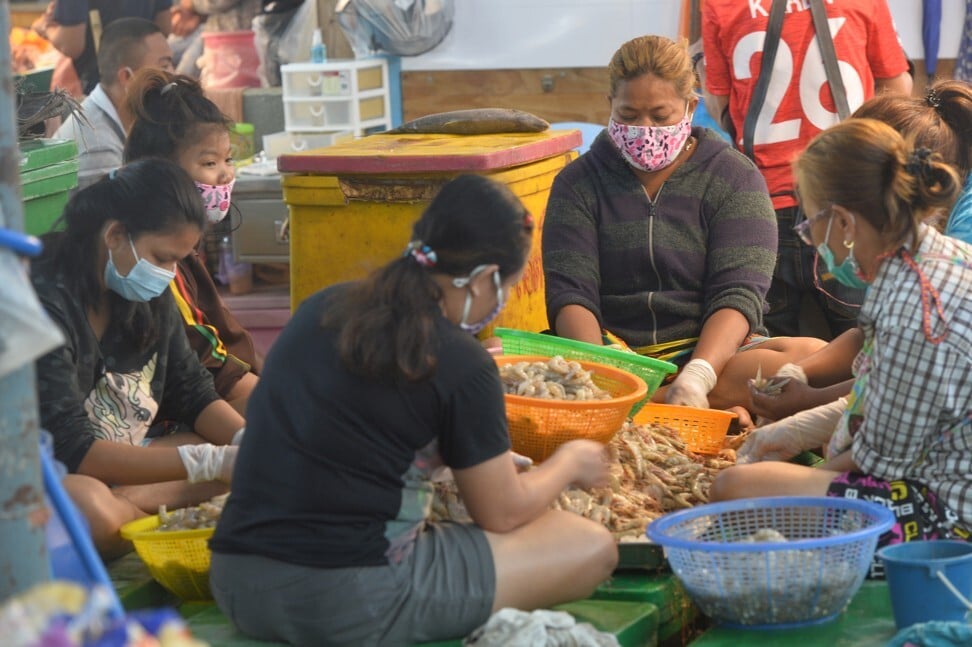 Coronavirus infections from illegal border crossings have not been restricted to migrants.

Earlier this month, authorities announced a cluster of cases among Thai nationals working at the 1G1 Hotel in the Myanmar border town of Tachilek, after hundreds of women working at a luxury karaoke entertainment complex crossed the northern border illegally.

“I don’t want this to be about people living outside the wall or inside the wall,” Samut Sakhon governor Weerasak Wijitsaengsri told reporters on Tuesday, referring to migrant workers who live in a vast compound, now sealed off, in his province.

“Covid doesn’t care whether you’re Thai or Myanmar nationals, whether it’s your weekdays or weekends,” he said. “We must come together.” 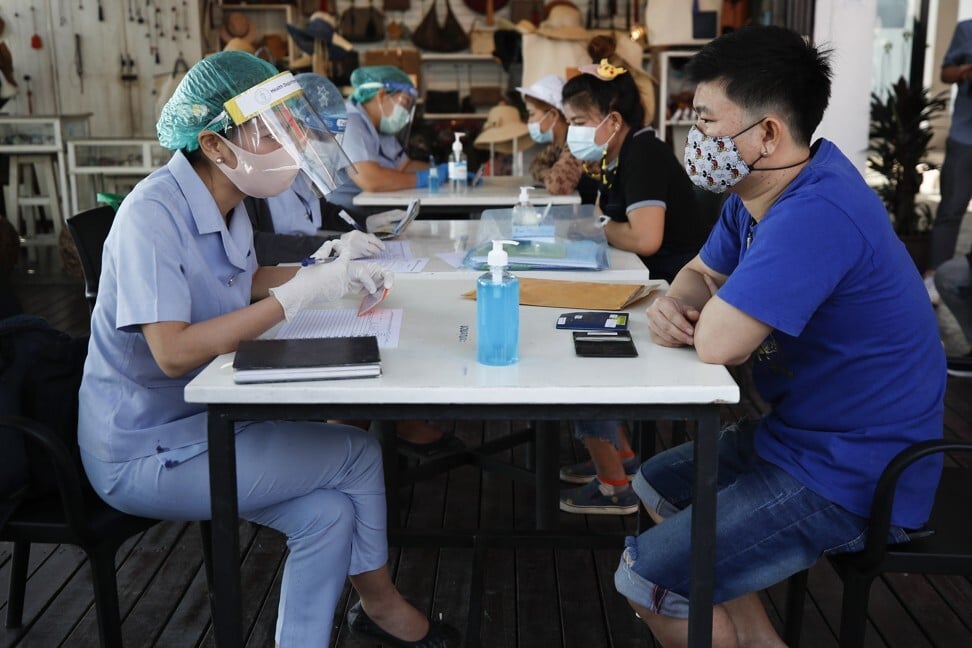 Migrant workers are screened by health workers at a food market in Bangkok on December 22, 2020. Photo: EPA-EFE

Until the shrimp farm cluster, Thailand had largely controlled the virus, with its borders open to entrants willing to undergo a 14-day quarantine and the government proud of its record of zero community transmissions for several months.

But its tourist-facing economy has taken a battering from global travel restrictions, and exports are likely to take a further hit with the latest surge – especially for the seafood sector, endangering Thailand’s status as the world’s seventh largest seafood producer.

The latest surge accounts for almost one-fifth of Thailand’s total caseload of 5,762.

On Tuesday, Prayuth warned that if necessary, he would order a new lockdown – something that could sink tens of thousands of businesses that have staggered through a lost year, hoping the new year holiday spend would deliver some relief.

Southeast Asia’s second largest economy was already forecast to contract by at least 6 per cent by year-end.

That has frozen the country’s real estate market and brought about a personal debt crisis despite a record government stimulus of nearly US$60 billion, while second quarter GDP plummeted 12.2 per cent after a first lockdown.

From Phuket to Pattaya, the tourism businesses clinging on in the absence of foreign visitors have relied on domestic travellers including expats lured by government co-payment bargains. With a New Year holiday looming, they had hoped to salvage some income from the year.

“I’ve already cut my staff as much as I possibly can,” Krid Kanjanakit, 36, a hotel owner in the resort town of Pattaya. “With another lockdown, I think we will sink.”

In central Bangkok, where vendors are reportedly already hiking up the price of masks, streets were uncharacteristically quiet late on Tuesday in the final days of the normally vibrant Christmas party season.

“I’m scared of Covid, but I’m more scared of a lockdown,” said Bua, a masseuse at the last surviving salon in a row of shops, who gave only one name. “This time, I have no idea how I will survive.”

Even so, a nurse at a quarantine centre in Bangkok who takes daily Covid-19 tests said a shutdown was urgently needed.

“The second wave is already here,” said the nurse, who requested anonymity. “The government’s testing is not enough. I don’t think they have this under control at all. A lockdown is needed, the BTS [train system] and shopping malls have to be closed.”