MMN has regularly attended monthly preparatory meetings on organising the ACSC/APF 2014 in Burma by Myanmar People Forum (MPF) in Yangon since December 2012 and throughout 2013. The MPF is a Yangon-based local organisation that initiated the organising of ACSC/APF 2014 in Myanmar with the participation of the civil societies. By attending these meetings, MMN is able to network with various local organisations and remain regularly informed of the process of the organising the ACSC/APF meeting in Myanmar in 2014.

On 13 and 14 June 2013, the MPF with the assistance of various local organisations organized the 1st ACSC/APF 2014 Local Consultation Meeting. MMN participated as an observer at this meeting, as it was mainly about how the local organisations could get involved in the whole ACSC/APF organising process, and contributed to the drafting process of the structure of the ACSC/APF 2014 organising committees, which consist of the Steering Committee, Organising Committee, Programme Committee, Drafting Committee, Media Committee, and Finance Committee. The roles of the above mentioned committees were also discussed and drafted by the participants.

The 1st ACSC/APF Regional Consultation Meeting took place on 4and 5 August 2013 in Yangon and was attended by MMN. It was agreed at this meeting that the regional organisations and networks had to self-nominate to join the various committees of the ACSC/APF organising committees and that the online vetting process would take place. Following this meeting, the MMN joined the Steering Committee and Programme Committee as a regional network. MMN also attended the 2nd Regional Consultation Meeting in Yangon on 20-21 October 2013. 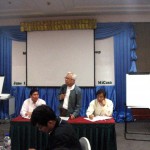 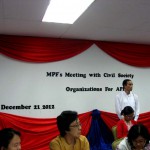