Today, MMN launched a new publication, “Safe from the Start: The Roles of Countries of Origin in Protecting Migrants” at its policy dialogue conference in Yangon.

The opening ceremony included speeches from the Director General of the Department of Labour in the Ministry of Labour, Immigration and Population of Myanmar, U Win Shein, and the Secretary of State of the Ministry of Interior of the Royal Kingdom of Cambodia, H.E. Ms. Chou Bun Eng, as well as MMN regional coordinator, Ms. Reiko Harima. The topics of the panels for day 1 were the following: migration mechanisms, information dissemination, regulation of recruitment agencies and overseas assistance.

In each panel, MMN first presented its findings and recommendations from the report. Next, panelists were invited to respond with their own impressions and suggestions. The day concluded with small group discussions on each of the four topics, with each group deciding ways that all stakeholders can move forward in supporting migrants in their home countries.

The full report is available on the MMN webpage at: 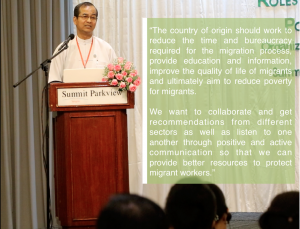 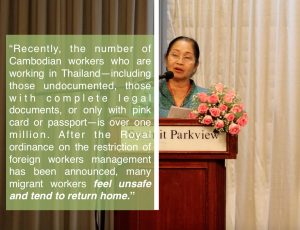 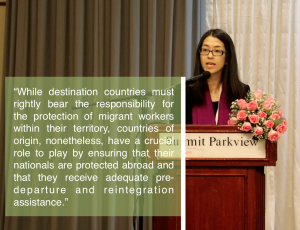